Your ideas for Elixir book authors and content creators

Inspired by @jeramyRR’s post, if you had the ear of a book author or publisher, or someone who might be thinking about creating other educational content, what would you tell them?

Several authors and content creators that you know of (and one or two you might not!) frequent the forum - this could be your chance to get your requests in

elixir & elm, something like in programming phoenix book. I don’t think it needs to be book per se, what’s wrong with online course on udemy or lynda?

I would like to see one project from start to finish that handles bunch of requests (and can monitor whenever he wants, get notifications for certain conditions). Maybe gaming server. Players connect to server to look for available players, chat with them, create games and play with other players. This is one example where this technology would do much good. https://www.faforever.com/
my 2 cents

I think there’s more than enough material for beginners. I’d like to see a distributed systems book that uses Elixir as its language. It’d have implementations of algorithms like Raft or solutions to say, Byzantine Generals.

In general, material that goes beyond making web apps would be nice.

Not again a chat application.

“This could cause a prejudice I have seen: that elixir/phoenix is good for making (for them) trivial chat-applications and not much more. While the easy to add real-time possibilities can be a big plus for administrative applications. Showing this plus would be good for marketing.”

Personally I’m not interested in gaming either. An administrative one showing everything that makes elixir/phoenix special please.

I think a book about how to use Elixir in embedded contexts (such as a book about Nerves) would be a very good idea.

Here’s an Elixir and Elm sample game, in case it helps:

It’s explained in this talk.

I think there’s more than enough material for beginners.

100% this. The low hanging fruit has been thoroughly picked by now and while I think a very decent way of learning is to make a tutorial on something, a lot of the time the videos/posts are actually full of guesswork that ends up being wrong, or they do a lot of handwaving about stuff that ends up being either misinformation or very unhelpful for the people who need the content.

What we need are more real world books. Don’t get me wrong. I love the inspirational “Elixir is great…Elixir rocks…Elixir does x easier” books and articles, but what really really matters is how do we do REAL WORLD things in Elixir.

We need a book that talks about the hard stuff: Deployments, networks, distribution, scaling, testing, logging, metrics, and real failure. It’s nice that all the books we have tell us that we CAN do all those things, but how are companies like Bleacher Report handling these topics.

I’ve talked to Steven Proctor in the past about him and I setting up a conference here in Dallas, TX to interview real Erlang/Elixir developers that have successfully dealt with these real world issues. It would be awesome to see a book that really dove into those subjects.

Now, that being said, I’m only halfway finished with Designing for Scalability with Erlang/OTP. That book may have everything I said above, but I’ve got a feeling it still isn’t in depth as we SHOULD get.

It’s one thing to read some examples, and it’s another thing having someone experienced tell you, “It’s not all Rainbows and Sunshine, but don’t worry because I’m going to show you the hard things you’re going to run into and how to overcome them”.

I would really like an introductory book to Ecto. The guides are fine but a book is more structured and can walk you step by step through the features.

Also books that cover real life projects would be great.

I would really like an introductory book to Ecto. The guides are fine but a book is more structured and can walk you step by step through the features.

Maybe this is what you want: http://pages.plataformatec.com.br/ebook-whats-new-in-ecto-2-0

PS: I am the author.

I have read that book. And I plan to re-read it again this weekend. To be honest I don’t remember much of it’s content because when I read it the first time it was all new to me. I do remember though that the book states that it is not an introductory book and one should refer to documentation.

Right now I am reading again programming phoenix and I saw “custom types”. This got me thinking how many features like this does Ecto have and I am not aware of them. I know I will discover them as needed but it would be nice to have them somewhere concentrated for reference. You don’t know what you don’t know.

We need a book that talks about the hard stuff: Deployments, networks, distribution, scaling, testing, logging, metrics, and real failure.

but I’ve got a feeling it still isn’t in depth as we SHOULD get.

Like Rust and some other languages are doing, maybe the community could start a dedicated website called like “The Book of Elixir”, say a github pages site, that everyone dedicates to that is willing to, which would contain the information that is not quite appropriate in the manuals, like how to code, why things are the way they are, how to use these interfaces best, different coding styles, etc… If we properly version the information in it, such as to mark a page/section/whatever as accurate for a given version and deprecate it on version change to where it has to be vetted again to be re-active and, for example, remove a warning on the page it may be inaccurate, that would probably be a good start. I’ve seen other communities do quite well on their books, and @AstonJ could give extra tickets in his monthly things for people that submit content. There are many ways it could be pushed along.

Using a decent static site generator then could even generate PDF’s and so forth as well. Could use disqus or something to let people submit comments they have questions about so the book can be further fleshed out over time as well, or perhaps just link each page to a github issue in the book repo with an auto-filled out template for the given page. Lots of options.

And besides it taking a long time to write, the people that have the experience are usually far too busy to write a book about them.

Let me say this: Elixir’s amazing documentation, both in the language core and in all of the libraries built with it, as wel as its continued focus on keeping it up-to-date is far better than any other programming resource I can think of.

I kinda wonder how Java guys could write thousand pages on a single book.

The first Java book I read, it has over 1000 pages. A book written by Herbert Schildt. It was pretty expensive.

There is also a book which I cannot remember, also about Java, it has over 2000 pages. I still remember a friend of mine dropped it onto a wooden table in our library, the table was flipped and then broken in half.

Those books still haunt me to this day

Ironically, the ruby book by Dave Thomas is the best book for me to understand object oriented programming, and the same person also authors one of the best book I’ve read in my life (Programming Elixir).

I do think the community would need a book or somethin like udemy course which would cover more in depth cases like complex supervision trees with complex state pasing. In the combination with other real life scenarios, combining let say Apache Kafka, Cassandra, Redis, distributed setup, simulation/prepaaration on how to setup such infrastructure for site going down.

At least to keep in mind, that almost all the books do cover chapters about genserver, supervisor and application. I know that you can build on this, but to see those tiny details in a connected story/ book is priceless.

I do know/own the Elixir in Action and Little elixir and OTP, but now while building something similar as mentioned above i see that we developers woud gain a lot with some more books in that direction. Both books are awesome. Thanks Sasa and Ben!

At least for me Elixir was the choice to go due to all those awesome stories of distributed computing, high availability of complex systems. Not one genserver process and supervision tree with one supervisor.

This are my thoughts now while building real heavy duty infrastructure for connected car platform. And with such book there woud be more projects like this.

I buy every material that comes out for Elixir. So go for it

p.s. A good book on gaming infrastructure, with some gaming server insights woud be soooo great. Personally game server was something i was trying/ would like to build and was reason for me starting with elixir. After I heard/read those great stories from Wooga, etc…

There’s a book in development here: 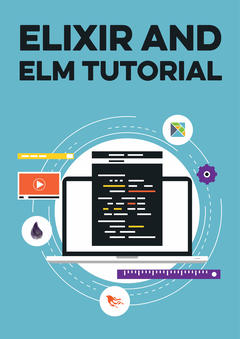 Welcome to the world of functional web programming! In this book, we'll learn how to create fun, scalable, and maintainable web applications. We'll use the latest ideas from emerging languages like Elixir and Elm to craft a fun experience. Rather...

Designing for Scalability with Erlang/OTP.

Designing for Scalability with Erlang/OTP

If you need to build a scalable, fault tolerant system with requirements for high availability, discover why the Erlang/OTP platform stands out for the breadth, depth, and consistency of its featur...

It does not have the “example” you ask for, mainly because these examples means doing pretty complex systems, which are always business specific.

But it try to show how the whole thing work.

I am finishing the Little Elixir and OTP guidebook, than it is its turn.