What does "(m/f)" mean in job description titles?

Male / female. In some countries this is a legal requirement to indicate that the position is open to all genders.

That is really weird… Why would one assume that a position is only open to one gender (especially when gender has absolutely nothing to do with the position) unless otherwise stated… o.O

Because in the German language the job title is grammatically male. So m/f or m/w ist added to make it gender neutral. Other forms are available as well, but less common as they negatively conotate one gender over the other.

Yep figured that there, just found it odd because english is gender-less and it was posted in english (thus making the whole (m/f) bit very ambiguous and confusing). Never ran across the pattern before. I initially thought it meant middleware/framework or middleware/frontend or something. ^.^;

Even though the announcement is not in German language it’s posted by an entity juristically related in Germany and therefore has to adhere to antidiscrimination laws.

Even though the announcement is not in German language it’s posted by an entity juristically related in Germany and therefore has to adhere to antidiscrimination laws.

Yep yep, just stating it should have been less ambiguous I’d think as it meant something entirely different on first inspection. Also based on the links and other things I found that seems to apply only to the german gendered version of words and is not required on the german ungendered words (if any) or in other languages, thus meaning it shouldn’t have been needed in english either as ‘Full Stack Developer’ is ungendered.

I lived in Germany for five years and was pretty surprised at how “behind” us they were. E.g., one is expected to attach a photo headshot with a resume when applying for any job. That would never fly here.

E.g., one is expected to attach a photo headshot with a resume when applying for any job.

Whoa really? That really wouldn’t work here at all, someone would get sued (probably for unproveable discrimination or something)! o.O

Lol, here’s a typical template. That’s pretty slick. When I was there, I had to staple an actual photo. 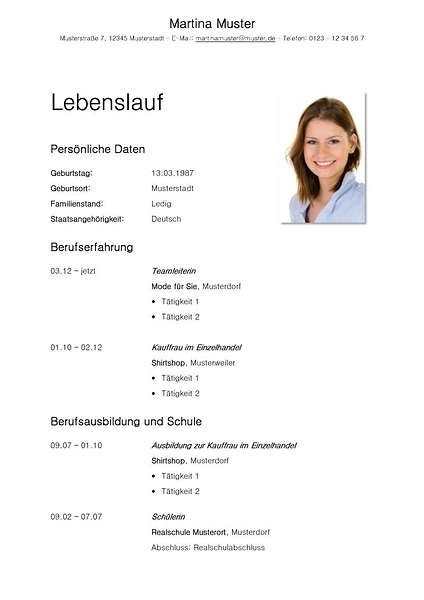 That really wouldn’t work here at all, someone would get sued

But anyway, if the employer is going to discriminate based on look he will do it sooner or later. There is no point in making it later IMHO except to make every one lose time and energy.

It really really is, and it’s not a joke how sue-happy this place is… ^.^;

So it’s nothing about discrimination
Best,
Roman

Apparently I started quite a discussion here. That was not my intention, I`m just looking for a good intern, who knows his/her way around Elixir.
In Germany we are required to write (m/f). Since this year as well x for neutral so from now on I will post jobs with (f/m/x). I hope I will not start another discussion.
Regarding the foto. You do not need to add a foto to apply in Germany - it is legally not allowed to ask for that. But since nearly every applicant in Germany is so used to this, that nearly everyone does it and in general you will have a disadvantage if you do not include a foto. If you apply for the Internship at Zaya you will definetly NOT have a disadvantage, I just need your CV, that is it.

If you have more questions to German job applications, just asked me. Since I am a recruiter in Germany I can most definitely help you!

Makes sense in German, but why list it in English when the word is ungendered (still makes sense if it is a gendered word few and far between they are)? o.O

/me is curious about the societal differences

Perhaps in your English-language listings you should spell it out instead of using abbreviations.

very true. I suppose it is not necessary then, but I am not sure.
Germans are sometimes quite particular

Germans are sometimes quite particular

In Germany it’s afaik even required by law to have it added to job postings.