While not as prevalent as in imperative languages, arrays (collections with efficient random element access) are still very useful in Elixir for certain situations. However, so far a stable and idiomatic array library was still missing, meaning that people often had to resort to directly using Erlang’s not-so-idiomatic :array module.

Arrays aims to be this stable, efficient and idiomatic array library.

Arrays is a library to work with well-structured Arrays with fast random-element-access for Elixir, offering a common interface with multiple implementations with varying performance guarantees that can be switched in your configuration.

Arrays is available in Hex and can be installed
by adding arrays to your list of dependencies in mix.exs:

Documentation can be found at https://hexdocs.pm/arrays.

Algorithms that use arrays can be used while abstracting away from the underlying representation.
Which array implementation/representation is actually used, can then later be configured/compared, to make a trade-off between ease-of-use and time/memory efficiency.

By default, the MapArray implementation is used when creating new array objects, but this can be configured by either changing the default in your whole application, or by passing an option to a specific invocation of new/0-2, or empty/0-1.

I’m proud to finally present a stable release of this library for you all. Work on Arrays started a few years back but was on the backburner because of other projects. Now, I finally had some time to get back to it.

The library is heavily documented, specced and (doc)tested.
I’m very eager to hear your feedback!

Any performance difference on the two array types with small, medium or large arrays?

This is a great question!

The current roadmap is as follows:

I have created a couple of benchmarks, and added them to the README.
Just like all benchmarks, these should be taken with a grain of salt.
There are probably ways to improve them.

EDIT: nicer and more recent graphs can be found a few posts further down.

You can run the benchmarks locally by running mix run benchmarks/benchmarks.exs,
which will also output the HTML format with nice graphs.

Appending a single element is very fast on arrays, even as sizes grow.
MapArray and ErlangArray perform similarly.

For extra comparison, we look at lists both to see how slow list ++ [val] becomes as baseline,
but also how fast [val | list] still is:

In certain situations where a list can be treated as ‘backwards’, this can be a very simple way to append elements.
As doing this is built-in, it will always be faster than our arrays.
Thus, it serves as a ‘maxline’. 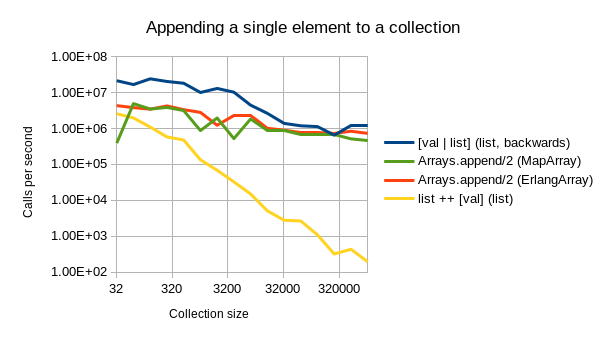 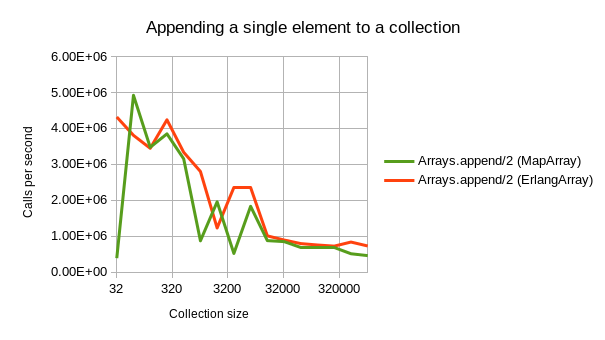 Accessing a random element is very fast on arrays, even as sizes grow.

Arrays start beating lists significantly once the collection has more than 256 elements.

For larger sizes, ErlangArray seems to be a factor ~2 slower than MapArray again. 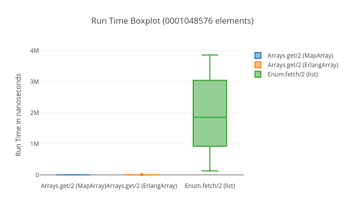 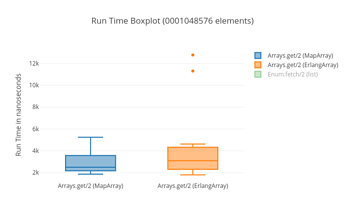 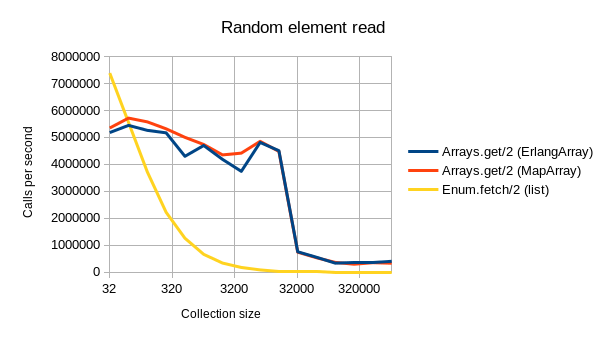 Arrays start beating lists once the collection has more than 128 elements.

For sizes up to 131072 elements, MapArray seems to be between 100% and 30% slower than ErlangArray.
For longer arrays, MapArray wins out, with ErlangArray being ~30% slower.

It seems like put_in has some overhead w.r.t. calling Arrays.replace.
This warrants more investigation. Maybe Access has some overhead for its calls,
or maybe the implementations of get_and_update_in could be further optimized. 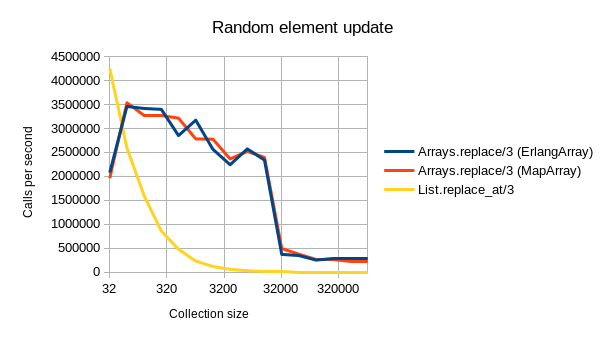 Strangely, concatenation of large collections is very fast on lists.
Probably because all of it happens in a single built-in function?

Between ErlangArray and MapArray, ErlangArray seems to handle this task 50% faster when concatenating two 4068-element arrays, and twice as fast for larger collections. 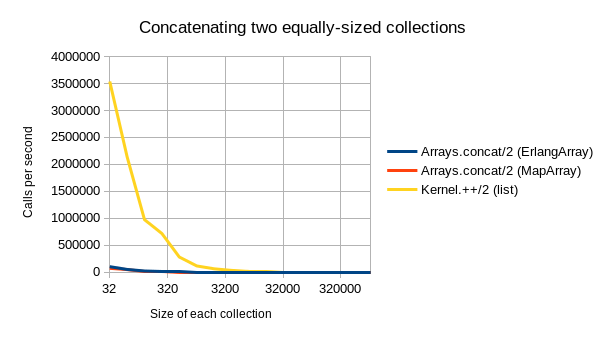 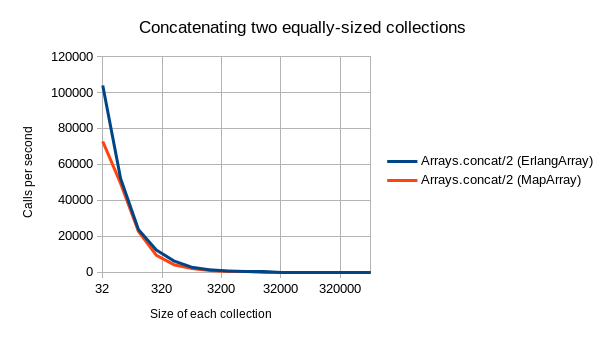 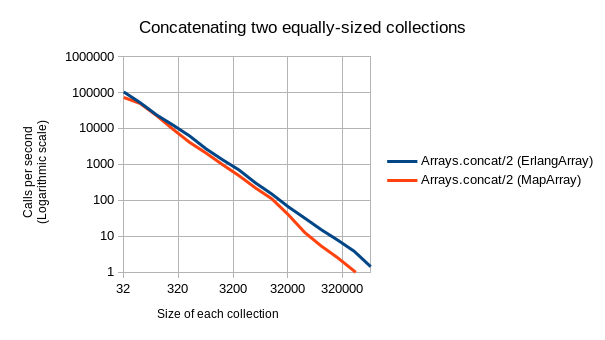 From above benchmarks, we know (caveat emptor):

The next version will probably be already 2.0.0 as some pain-points in the current interfaces have been brought to my attention. To be precise:

This library seems well thought out!

Maybe it’s just me, but I wish it were called Array (singular) to match the Elixir standard library.

Maybe it’s just me, but I wish it were called Array (singular) to match the Elixir standard library.

Yes, that would have been nice. However, a package with that name was already registered on Hex.PM seven years ago, so there is very little that can be done

EDIT: And besides that, having an OTP application (like any Elixir library is) associated with the application atom name :array (or any other standard-library module for that matter) seems like a rather bad idea as well.

And besides this, the plural form was chosen to indicate that the underlying implementation can easily be swapped out

I have added some graphs to the benchmarking post above.

Improves the Arrays.Protocol to be more friendly to implement. Specifically:

I have been experimenting with implementing an Arrays implementation in native code, by wrapping an immutable datastructure written in Rust using NIFs (Natively Implemented Functions).

The result can be found on the ArraysRRBVector repo, or also as the library of the same name which has been published on Hex.PM (v0.1.0, and it is unlikely to be refined into a stable version).

Unfortunately, “if you want to speed it up, use a NIF” is a statement that does not seems to hold much truth for situations such as these, where you want to implement a datatype on which individual operations are expected to run in the order of microseconds

. I’ve benchmarked the Rust-based implementation against the existing ErlangArray and MapArray ones, and it turns out that the overhead of the NIF-calls significantly overshadows the otherwise highly performant techniques used in this implementation. (Benchmark graphs can can be found in the README).

So, this was a worthwhile experiment, but it probably makes little sense to use the NIF-based array in production circumstances over the other ones. Maybe there is something I have missed in the implementation, and it still might serve as a nice example of ‘how to implement a NIF-based datastructure’, but it is not the “super efficient” solution that I’d hoped it would be.

So, back to the drawing board it is! Time to look for (or build) one of the more modern array-implementations in plain Erlang or Elixir code.

I have some better news: Recently I was introduced to the Aja library, which implements multiple of data structures focused on performance. Its A.Vector is a persistent immutable array implementation, written fully in Elixir.

I wrapped A.Vector with the Arrays.Protocol (which was a breeze as Aja already exposes a very rich API

), and benchmarked them against the other implementations.

The results are amazing!

Aja’s implementation is fast. As can be seen from below benchmarking graphs, A.Vector beats the other alternative datatypes outright in most common tasks: 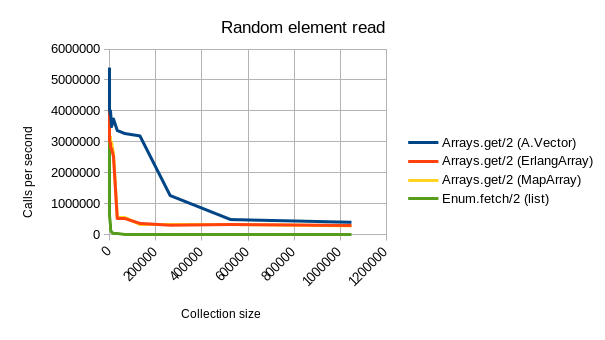 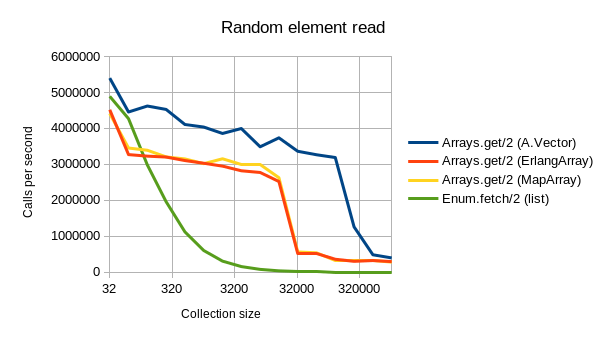 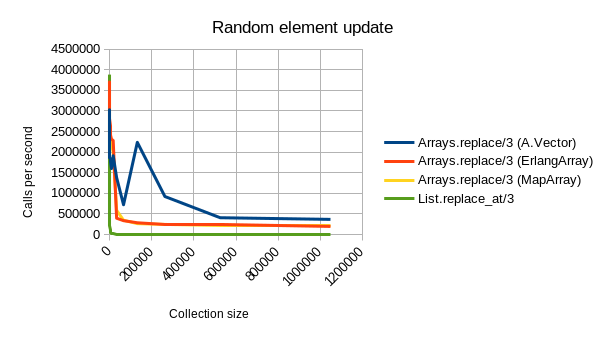 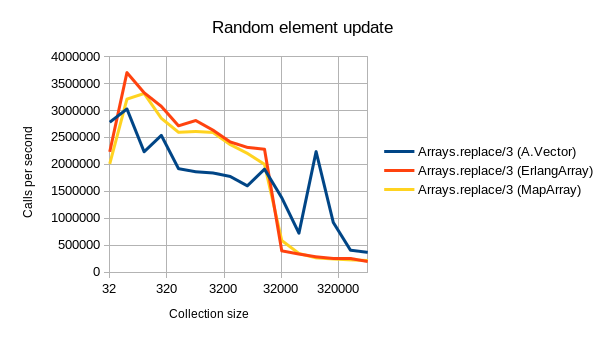 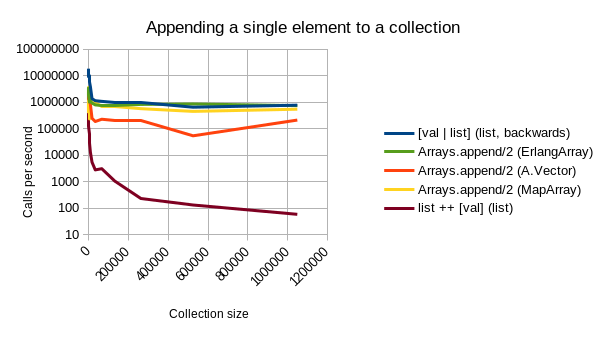 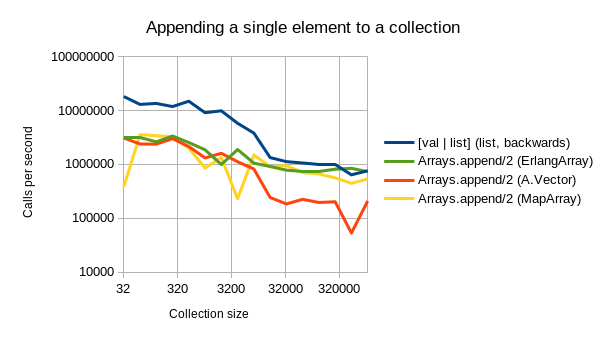 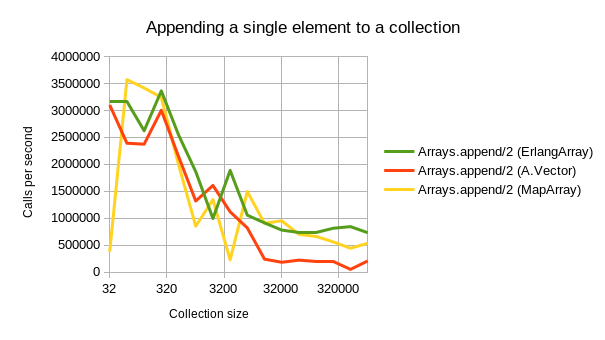 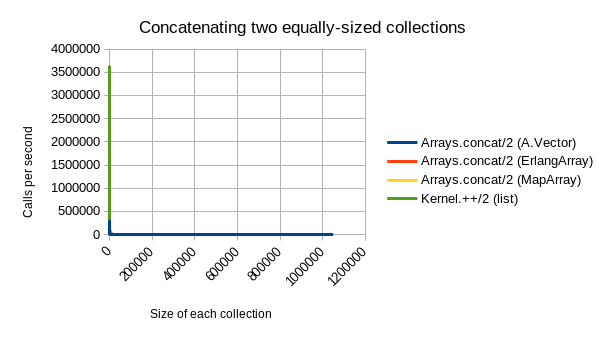 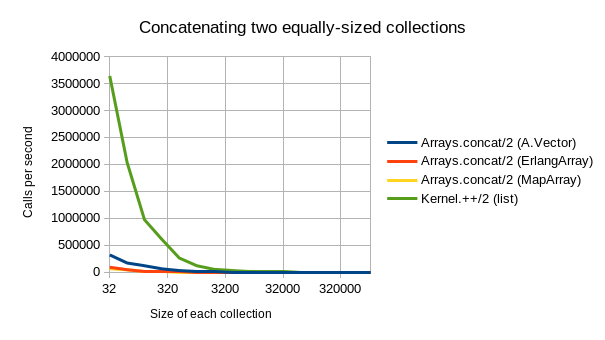 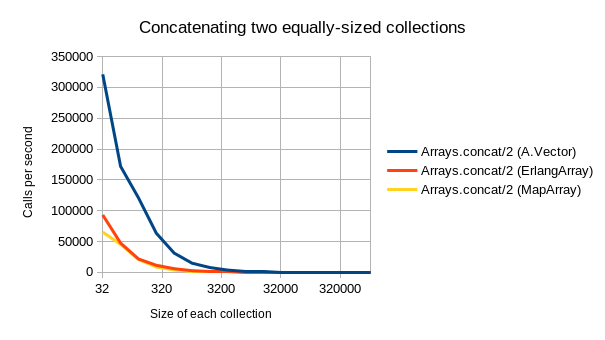 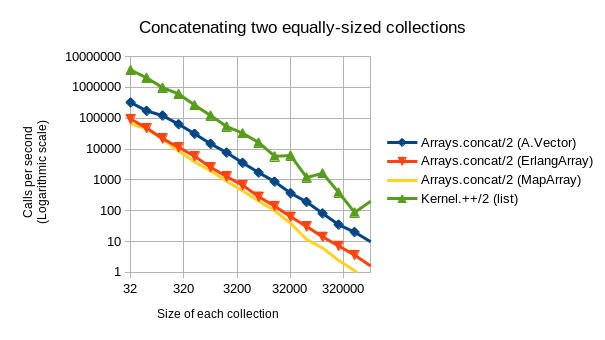 You can find ArraysAja on GitHub in a separate library, of which v0.1.0 has been published to Hex.PM.

I did not like the graphs I constructed before very much: they are neither beautiful nor easy to understand, and took a lot of manual labour to create.

In these graphs, we compare the average running time (i.e., ‘lower is better’) of four common operation on sequential collections. 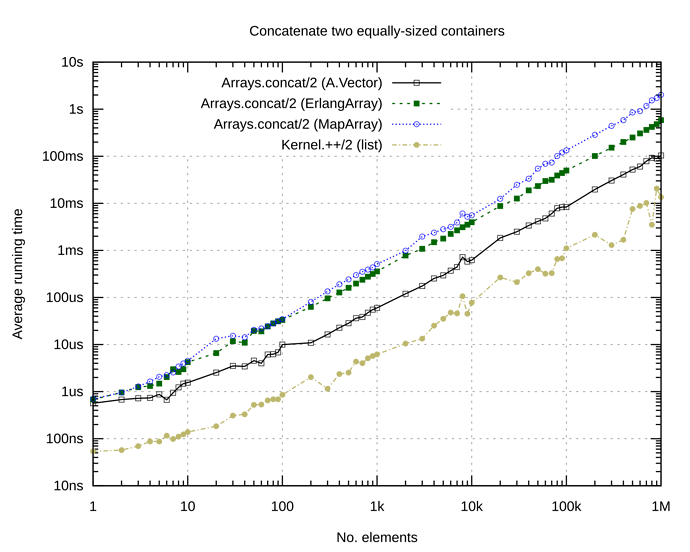 Concatenation of lists seems to be optimized to an extreme extent within the BEAM, because while this should be asymptotically slower, it blows all other implementations out of the water.
For larger collections, A.Vector is significantly faster than ErlangArray or MapArray. This is one operation in which ErlangArray is clearly better than MapArray (in most other operations, their performance is very similar). 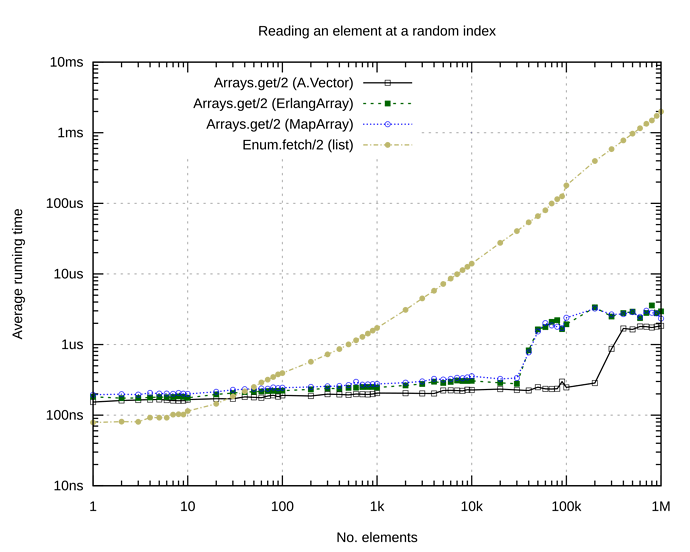 Random access is a prime situation for which arrays are better suited than lists (once you have more than ~20 elements; below that, the JIT will be able to optimize the list-based solution to something incredibly fast).
This is another situation in which A.Vector is significantly faster than ErlangArray and MapArray, being just as fast as the builtin lists for small collections, and not really showing any signs of slowing down until having more than ~120_000 elements.
That said, the performance of MapArray and ErlangArray is by no means bad; up to arrays of ~30_000 elements, they are only a constant amount slower than A.Vector. 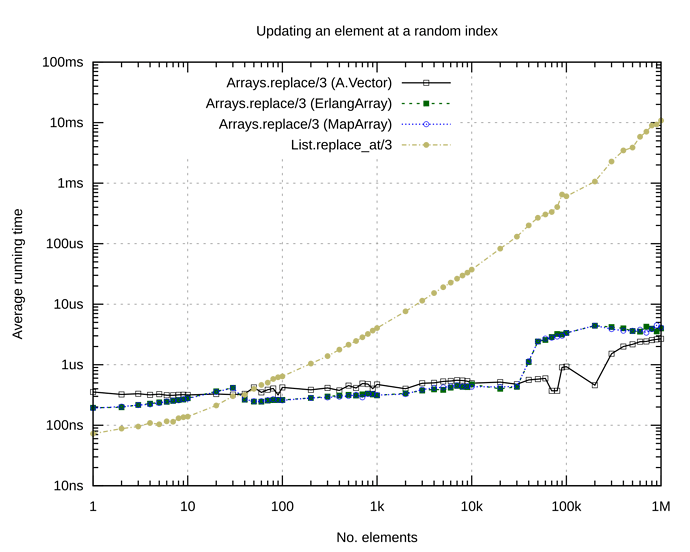 Updating a random element is another operation for which arrays are clearly more suitable than lists. As soon as you have more than ~20 elements, that is. Here, A.Vector actually is beaten by ErlangArray and MapArray (which perform similarly well), at least until your array has more than ~30_000 elements. 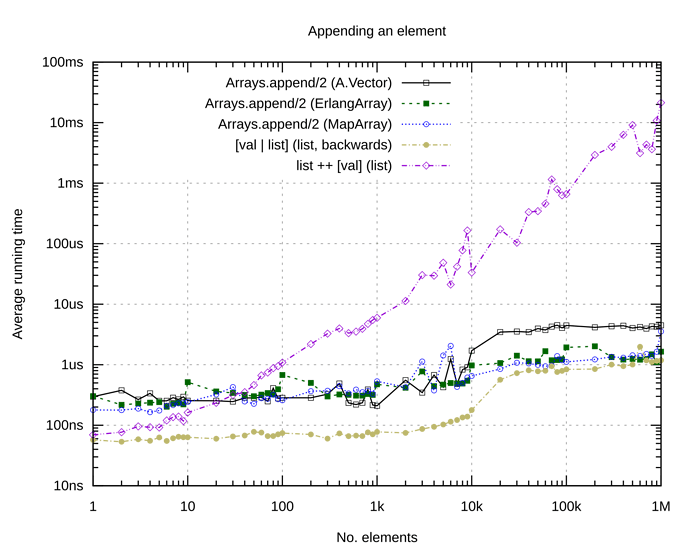 It’s clear that appending a single element to the tail of a list is a really bad idea. In some situations, pre pending an element to a list and then ‘interpreting it backwards’ is a possibility, although that will still not allow fast read/write access to any of the other elements in the collection (as seen above).

For appends, all three kinds of arrays (ErlangArray, MapArray and A.Vector) seem to behave similarly well. A.Vector slows down a little here once the ~10_000 element limit has been reached.

Which implementation should I use?

Benchmarks are nice, and from above benchmarks it seems that either A.Vector if reads are common and ErlangArray if writes/appends are somewhat more common might be a good rule of thumb.

But why choose based on general advice? The main fief of the Arrays library is that it is easy to switch out one array-implementation for another (by an app-wide config or an option passed to Arrays.new), so the better advice is to make your choice based on benchmarking your particular application!

I want to thank @sasajuric for his great article on sequences of december last year, and for publishing the source code to make the graphs in that article. (And also to @sabiwara for his help in this matter – hope you get around to writing that longer blogpost about A.Vector soon!)

I will probably be spending my spare time the next couple of weeks on some of the other Elixir libraries I’ve been working on (hint). After this, work on Arrays will continue. The roadmap is still to add support to more common array operations: swapping elements at two indices, sorting arrays, shuffling arrays, and maybe more if other common operations are identified.

I urge you to try out the library! It is very stable, well-tested and performant.
At some distant point in the future a v3.0 might be released if the Arrays.Protocol might be refined further to include more paths for optimization. This will be a breaking change for array-structure implementers but probably not for users of the library.

I’ve been doing some more work on ArraysRRBVector:

Now that there is a reasonably simple way to call an Elixir function from within Rust (c.f. RustlerElixirFun: repo, topic), it seemed sensible to try this out by implementing a new version of map (as in Enum.map, but keeping it as an array) for this native array datastructure.

The new approach iterates over the leaf nodes in the reduced-radix-binary tree, which (when fully filled, which all except the last one are), each contain 64 elements. This means that:

I have not done any benchmarks yet. I’m pretty sure that it is still not as fast as staying in Elixir the whole time (when e.g. using an ErlangArray, MapArray or Aja.Vector), but it definitely is faster than the old approach of turning the whole vector fully into a list, mapping over that in Elixir, and then turning it back.

Most importantly, it might be a nice example for people of you to use RustlerElixirFun to call Elixir code from inside Rust in their own projects.