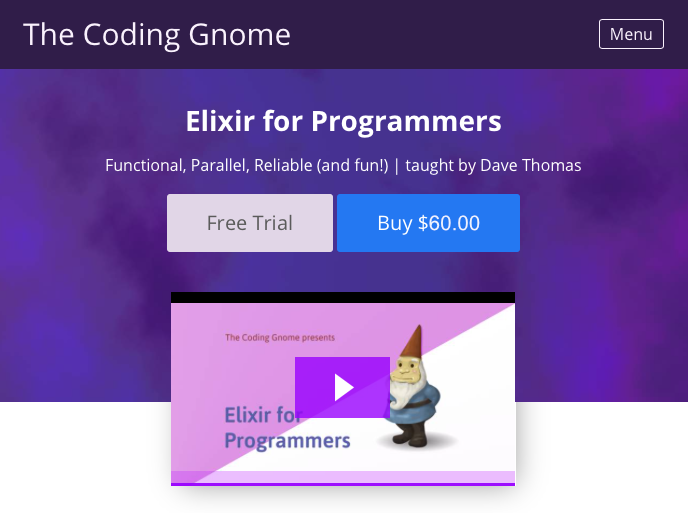 You’re a programmer, so you don’t need spoon feeding with the conventional drivel about “this is an integer.” No. You need to know what’s different, and you want to know quickly.

But you want more. True mastery of Elixir comes from understanding the underlying idioms: functional programming, transformations, concurrency, and application structure. You need to know the tools, such as IEx and mix. And you need to understand the frameworks, such as OTP and Phoenix. This course will get you started down this road (and your experience will take you the rest of the way),

The course has videos to show you stuff, text to give you facts, quizzes to help you remember, and exercises to let you practice.

More and more developers are switching to Elixir. Take this course and join them.

35 Likes
How have you been learning Elixir & Phoenix? (2017 Edition!)
Discussion: Don't add a database layer to your Phoenix application
Exploring Elixir on Youtube
What's your preferred way to read technical books?
Musings on some recent videos by Dave and José
Single Responsibility Principle - what does it mean to you and your Elixir apps?
"Do you really need a database?"
How to design app with JSON API and HTML interface?
PragDave’s new Component library - his preferred way of building apps
Use Phoenix for a simple API server?
Your ideas for Elixir book authors and content creators
If you had to choose one single feature in Elixir that you love the most, what would it be?
PragDave's online course - 50% off!
Elixir Book Sales / Discounts / Coupons Thread
How would you recommend learning Phoenix today?
Beginner project ideas?
What makes a web application fast?
Resources on how to build and structure Umbrella Projects using Phoenix 1.3
Books on the design of web application architecture
Would you recommend using MongoDB with Phoenix with current driver status in mind?
Programming Elixir (Pragprog)
Learning Resources For Functional Programing App Design Tecniques
Are there any premium videos for learning Phoenix?
Best practices for testing with doctest
I have $150, which courses/books may I buy to learn Phoenix?
Tutorials or Blog posts on adding phoenix to an existing application
Full stack Ember.js & Phoenix (self-published)
How to use the spawn functions?
Where to begin learning Elixir for someone with existing programming experience?
Does my frustration with Node merit switching to Elixir?
Learning Elixir in 2018
What's next (for OTP/Elixir)?
Your Elixir Tips Thread
New to FP, best course and difference between Dave Thomas's book and course
Should we adopt Dave's way of building applications as a series of components? (Dave's talk has now been added!)
Extracting common functionality between phoenix applications
How do YOU use umbrella apps, and why?
Umbrella projects vs. stand alone apps as a dependency
Elixir Video Tutorial - Elixir for Programmers vs. Take off with Elixir
Lightweight Elixir web framework?
Functional programming learning path
Learning Elixir Path for someone not new to functional programming
Extending Elixir's learning resources [core: book, extensions: guided_projects]
Learning Elixir, frst impressions ( plz don't kill me ! )
Are there any books that cover achitecturing applications?
Functional Web Development with Elixir, OTP, and Phoenix (Pragprog)
Need Recommendation on Learning Elixir
What should be the next books I read?
Looking for a book or video (preferred) that goes over concurrency patterns, gotcha's
I bought 5 PragProg elixir related books. Should I still buy "The little Elixir & OTP Book?"
Elixir design and refactoring books
Any Elixir resources for framework agnostic architectures?
Getting things done with Elixir - tips?
Help me decide between Phoenix Presence and a custom solution
Recommended course for Elixir begineers?
Discounts for PragDave course?
What learning resources make you write actual code?
Application communication best practices
Application communication best practices
Django vs Phoenix
Elixir for Programmers, Second Edition (PragDave)
Please recommend Elixir + Phoenix Resources, Communities, etc
Any good books or resources for project maintainability?
Programming Ecto (Pragprog)
Learning Elixir Path for someone not new to functional programming
Book path recomendation for Ruby/Rails dev of 5+ years
Applications are Components (AKA Microservices in Elixir)
Are there any premium videos for learning Phoenix?
Benefits of elixir other than OTP
Programming Elixir (Pragprog)
How To Get Phoenix & VueJS working Together?
24) ElixirConf 2017 - Elixir + Neo4j - Regina Imhoff
24) ElixirConf 2017 - Elixir + Neo4j - Regina Imhoff
Approach to microservice dependecies in umbrella project
eDev June 24, 2017, 5:16pm 2

Is this a video course or text course? Looking at the content listing every chapter says ‘text’ next to it - is there an accompanying video with each chapter?

I just bought it

me too. Look forward to getting time to practice

This course really makes the reader “think in Elixir”!

Probably not for Elixir experts (at least so far), but beginners and intermediates will certainly benefit from it.

P.S. Some introduction into the so discussed Phoenix “context”, will be great, as well as some example of showing how to use phx.gen.json in practice. But maybe, it is material for another course.

P.S. Some introduction into the so discussed Phoenix “context”, will be great, as well as some example of showing how to use phx.gen.json in practice. But maybe, it is material for another course.

You should definitely ping @pragdave with that feedback - he’s usually very open to ideas. I agree that some info about Contexts would be really handy (and make the course even more appealing for people - as there’s not much material on Contexts yet)

+1 for Contexts. I think it would be a great addition.

I really need to stress (again) how great this course is.

It takes the student hand-by-hand across the development of a game and it introduces concepts such as Agent, GenServer, etc. so smoothly.

I have to admit that it is the first time I realised what is going on with the GenServer and the state of an Application. So well presented!

I really need to stress (again) how great this course is.

I’ll chime in too. Although I haven’t got as far into the course as I would have like to, I have gone through enough to know it is worth the price, especially if you can get it for $40.

I love the “…for programmers” concept. He doesn’t waste time explaining the concepts that most people coming into Elixir are (probably) already familiar with. Moreover, the video demonstrating iex was extremely helpful, as I feel I can utilize iex more effectively and efficiently.

I look forward to completing the course. I just need to find the time

Did you both read Programming Elixir first? If so, how do you feel it fits in with that? (Would you recommend this course before/after it?)

Did you both read Programming Elixir first? If so, how do you feel it fits in with that? (Would you recommend this course before/after it?)

Yes, I did. I feel that the book is good to get an initial introduction to Elixir, while the course provides the means to the student to start thinking in Elixir in practice.

The order I recommend is first the book, then the course (which also covers Phoenix to a certain degree).

I hope that Dave will produce further courses and books related to Elixir. His talent in teaching is incomparable!

Looks like the discount on the course is gone! Dang, missed it while traveling.

I just finished writing the first of my Coding Gnome courses. This one was an introduction to Elixir for experienced programmers.

I tried to concentrate on partitioning code in a reasonable manner. I didn’t use the traditional Elixir scheme, which comes from a mating of Ruby and Erlang project layouts. Instead, I tried to come at it with a fresh eye, asking myself how the various aspects of the code could best be decoupled.

My queue of learning material for Elixir just keeps increasing in size. I love it, my wallet doesn’t (har har). I’ll be purchasing this course

Dave’s book was one of the best technical books I’ve ever read, so I am looking forward to the course.

, but I would like to ask you how would you compare it to https://pragmaticstudio.com/elixir?

Keep in mind that Elixir is Dave’s main language now and possibly for the foreseeable future. He’s written a book, teaches a university course on functional programming, speaks at conferences, is active within the community and, I’m sure, loves hacking with Elixir in his spare time. In other words he’s not just an expert but extremely passionate about it.

He can provide an insight that few others can imo - and this is certainly how I feel about this course and I haven’t even finished it yet!

Everyone interested in Elixir needs to do this course Imo

It’s the best online course I have ever done, partly because it introduces you to new (or different/modern) ways of development.

I definitely agree. This course is a must buy. I’ve been working with Elixir for the better part of a year now and the first half cleared up 90% of the stuff I was still struggling with.

Hell, the explanation of how the = operator works in Elixir, how it enables pattern matching and how it’s different from other languages was alone worth the price of admission in my opinion.

I’m excited to get to the latter half of the course as, from what I hear, it gets into a lot of the architectural things that really interest me about Elixir. Mostly how you can split apps into multiple components. I’m already working on an umbrella app but I’m interested to see how Dave does it.