I have a project that has a folder for image it uses. I call this folder images.

Usually when I do mix assets.deploy from the root of my project everything is compiled and phoenix puts the images it needs inside priv/static/.

But it does not address my issue. Is there a configuration I can change to add my images folders? I believe this would have to go into mix.exs or something amongst those lines.

Usually when I do mix assets.deploy from the root of my project everything is compiled and phoenix puts the images it needs inside priv/static/.

You’d need to be more concrete what assets.deploy is setup to do in your application. By default on a new phoenix app with esbuild it’ll only handle js/css and no images in the first place.

I guess, it just minifies, compresses and generates file hash on js/css files.

However the images are compressed by us, so they are directly placed in priv/static folder and the mix assets.deploy works on those images in place: 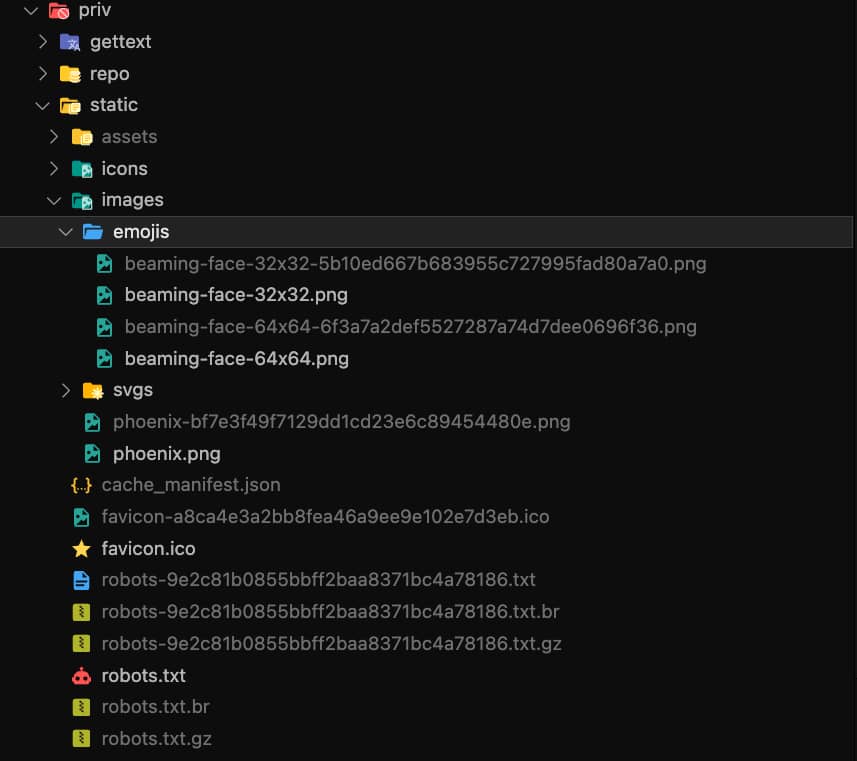 Excerpt from Introduction to Deployment:

This step is required only if you have compilable assets like JavaScript and stylesheets. By default, Phoenix uses esbuild but everything is encapsulated in a single mix assets.deploy task defined in your mix.exs.

And that is it! The Mix task by default builds the assets and then generates digests with a cache manifest file so Phoenix can quickly serve assets in production.

P.S. I fumbled in the beginning as well, but I just saw existing projects by other people and figured out that you just leave images and such in priv/static folder.

But isn’t the priv/static folder automatically generated?
Am I meant to add my images/static files there ?(i.e. is this a good practice?)

It used to, but hasn’t been since 1.6 – based on the generated setup of a fresh phoenix install.

Let me find an official documentation.

As @LostKobrakai mentioned, it’s a new way of doing it after webpack was removed!

Note running mix phx.digestwill create digested files for all of the assets in priv/static , so your images and fonts are still cache-busted.