Hey everyone! New to the forum, not new to Elixir.

In any case, recently had a discussion with @benwilson512 on overhead during GQL requests, and then saw a related question in the Absinthe channel on Slack, so decided to open it up here for input/guidance.

We’ve been tracing our API’s performance in Datadog and have seen some oddities that we can’t quite diagnose. Pictures are worth 1000 words, so here are some flame graphs for one request that demonstrates the issue: 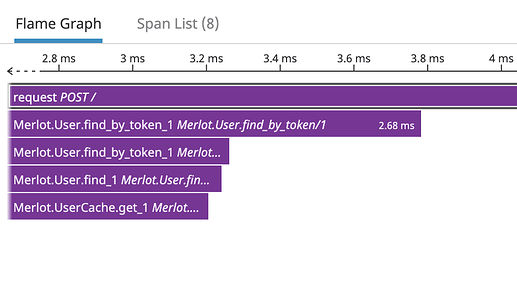 What’s happening in the gaps after auth/context and after the actual resolution?
This is just one request, but many of our requests have this shape, where the majority of the request has something unknown happening for at least 50ms or so. In some cases, we have 100ms or so unaccounted for, usually on the tail-end of the request post-resolution.

Is anyone else seeing things like this? Happy to answer any other questions to help figure this out!

One key thing to check on is what your scalars are doing. Scalars are serialized in the result phase, which happens entirely after the resolution phase. In the past, poorly optimized serialization functions have lead to lengthy post-resolution times.

To dig in further, some additional metrics would be handy. Can you provide an example query document? How large is the result JSON in bytes? How large is the schema (approximated by MyAppWeb.Schema.__absinthe_types__ |> map_size)?

Thanks for responding, @benwilson512!

Here’s a gist for a sample GQL doc that would generate the flame graphs in my original post. I’ve taken some fields out for IP purposes, but that’s generally the shape. Most types you can assume the type of. There are aggregate types when it makes since (user, for example). Also of note, we’re not currently using any custom serialization.

The result of __absinthe_types__ |> map_size is 34, which doesn’t seem to be that large to me, but perhaps that’s incorrect?

Update
So I’ve shaved some time off because I wasn’t .uniq-ing IDs in batch loaders, but there are still two sizable time gaps for which we’re unable to account:

Hi @derekbrown I still need some sense of the size of the returned document. This will help diagnose time spent after the resolution phase constructing the actual JSON result.

I recommend using Telemetry to provide a few more data points, specifically the [:operation, :start] event would be very helpful because right now although it is likely that Absinthe starts work immediately after the context is set, in theory there could be other plugs or issues within Absinthe.Plug that are introducing delay. See https://hexdocs.pm/absinthe/telemetry.html#content for details.

The document is relatively small, so processing on the document should happen pretty quickly. I’m going to take that document and create a project with a similar schema to see if we can reproduce the observed performance issues.

Sorry about that! Missed the question in your first reply, @benwilson512 . The return document size ranges depending on the query variable, obviously, but the return document for the graphs above was 155kb. FWIW, we see the same “lag” regardless of the size of query.

We have Telemetry events already setup; I can get that to you ASAP. Not a bad idea to add those events to the tracer as well. If I’m able to do that easily, I’ll update this thread with new graphs that show the start & stop events on the operation.

As a side note, it will be super interesting to see this data alongside a PersistentTerm schema once we’re able to release that.

Update: I’ve been able to add Absinthe Telemetry events to the tracer, per reply above from @benwilson512 . Below are some observations and pretty pictures. I’ve tried to keep the same query here from the original post, for some apples-to-apples comparison. Hope this all helps.

Context to Operation Start. There’s a miniscule gap (≈300µs) between context being added and the operation starting, but not significant enough for us to blink.

Operation Start. The span on the right of the screenshot is the first resolution.start event, which is followed by the fetch_messages query in the overall screenshot above. Would we expect there to be a ≈6ms delay or so between operation start and resolution start?

Operation Stop. There’s a ≈10ms gap after operation.stop that’s unaccounted for. I’ll dig into what could be happening there (perhaps other plugs?). I don’t assume so there’s any cleanup or anything that Absinthe would be doing after the operation, is there?

Running into dead ends here trying to measure what’s happening before context gets added, or after the resolver responds with the data.

I’ve tried removing Plugs, slimming down the endpoint/router logic, and adding spans to field-specific resolvers, all to no avail.

Open to other suggestions; I just want to know what’s happening.

And JSON encoding being a majority of the tail makes sense as well; I think that length of time is proportionate to our response object. I’m still trying to diagnose if it’s our nested query documents (sometimes 4-5 levels) that’re causing the perf gap during validation or if it’s something else.

I’m still trying to diagnose if it’s our nested query documents (sometimes 4-5 levels) that’re causing the perf gap during validation or if it’s something else.

With respect to this, the best bet would be to create something we can both iterate on that exhibits the behaviour you’re running into. I should also ask about the server you’re running this in.

@derekbrown did you end up with any further learnings from this? I’m working with a similar issue. Any useful resources to link?

I didn’t unfortunately. But I do think that a lot of it is resolution. We made a couple of changes to batch resolvers that seemed to have helped. There were a couple of uncaught n+1 errors as well on our side. Still a lot of unexplained gaps though, but the response times are at least manageable now.

The offer to investigate any runnable example stands! Do make sure to check out the persistent_term backend Absinthe.Schema.PersistentTerm — absinthe v1.6.4 which we’re promoting out of the Experimental namespace in the next release. It has proven to be both faster and easier to work with.

I’m seeing the original post was on Absinthe 1.5.0, and we definitely fixed an N^2 regression in our variable handling somewhere in a release between that and latest. Hopefully you’ve updated since!

Yes! Forgot to mention that: we’re using PersistentTerm as well (have been since it was in PR last year), and it’s definitely provided gains as well. Huge thanks to @benwilson512 and team for that.

FWIW, when I say that our response times are manageable, I may have been understating. Our overall times have been reduced to a third of what they were.

It’s still a mystery to me exactly what’s happening, but it’s now a low priority mystery for us.

Awesome. Do note that once OTP 24 is released we’ve seen significant improvements from the JIT as well, so we expect the overhead to drop a further ~60% from that alone.