I have a Liveview that subscribes to a Pubsub topic and starts a Genserver when I click in a button.

The Genserver sends a message back to the Liveview using the Pubsub, those messages seems to only be processed after the map ends: 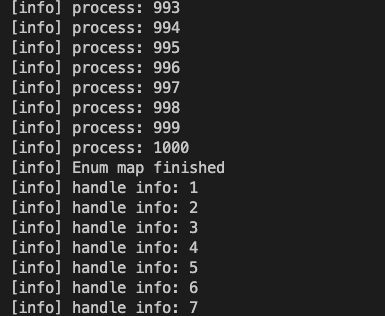 Is there a way to receive those message before?

I have created a repository to reproduce: GitHub - rafaeliga/liveview_pubsub_update: Sample project to test Liveview + Pubsub.

The processes are running concurrently and there isn’t really a way to force the subscriber to process a message before the publisher can continue in a PubSub, I think. Looks like the sending is faster than receiving in this case (or the messages go slower through the PubSub system).

Anyway, why do you want the receiving to occur before? Is it leading to a time delay?

I think something like GenStage/Flow could provide backpressure, leading to blocking of the producer before consumers have had time to consume the items.

Looks like the sending is faster than receiving in this case (or the messages go slower through the PubSub system).

it’s not that sending it’s faster. what happens is that publishing the message won’t stop a process of running its reductions.

Is there a way to receive those message before?

My use case is showing a CSV import / insert data in database in real time.

What your example shows is that a) it is extremely quick to map through a list when you do no work in the map function and b) pubsub works. You can probably move on to the next stage.

You could delay processing the next chunk until after the message is received by calling the liveview instead of broadcasting, but I don’t imagine you want to do that in practice.

There is a time difference between the Pubsub send message and Liveview receiving.

That time increases if I send more messages(more data):

Why do we have this difference if I have more data? Its related to the Pubsub or the Liveview on receiving these messages?

Why do we have this difference if I have more data? Its related to the Pubsub or the Liveview on receiving these messages?

Because message passing between process is not a synchronous procedure.

The delays you’re experiencing in your test is not particular to any implementation of the PubSub or Liveview but instead of how you choosed to implement your synthetic load.

Hi @cevado! I think there’s some misunderstanding between what @rafaeliga wants and what you are explaining. I don’t think he is expecting to process anything synchronously.

If I understand correctly, what @rafaeliga meant is that there’s some considerable delay from sending to receiving the message; this is nothing to do with the concurrency model per se.

You mentioned reductions and this made me think that perhaps, the LiveView process’s mailbox is getting too many messages and the delay he’s experiencing is the delta between processing the messages.

However, based on the data he provided, it seems that there’s a considerable delay between sending the message and receiving it, even with a low amount of messages to process.

Curiously enough, from what I’ve heard about Elixir/Phoenix in the past, I’d expect that broadcasting messages would be a little bit more performant than that. But perhaps, this is a question on how to better structure the message passing between the processes (perhaps batching it or something).

please look at the code provide…
code that starts the “background processing”:

when LiveviewPubsubUpdate.Import.start() is called it is a synchronous process, so start() will release the live view only when the init callback finishes running.
the init callback in the GenServer is that part that publishes.

@cevado could you elaborate what you meant by this statement? Bear in mind that even though LiveviewPubsubUpdate.Import.start() is synchronous code, the Phoenix.PubSub.broadcast call is not. That is, messages arrive in the LiveView before the synchronous code finishes processing, which does not seem to be the problem IMHO.

The main question seems to be that after a message is dispatched to the LiveView, there’s some delay before it actually gets processed.

I think that if LiveView was receiving and processing its events fast enough, this perceived delay would not exist. I might be missing something here, but it doesn’t seem to be a problem about concurrency.

You should see more of what you expect.

@benwilson512 I think that handle_event is from another process; how is it blocked by start from another GenServer in this case?

the liveview lives inside a single process for a particular session, so the handle_event of the liveview and the handle_info are blocking each other.

Oh, I see, that makes total sense! Thanks for the well-rounded explanation @benwilson512. I completely forgot that the GenServer process everything linearly like you mentioned (because it’s basically just a loop waiting for its time to process something). This definitely is what’s going on here.

The code below worked:

Then looking at the Genserver documentation, handle_continue did the job too: